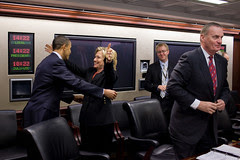 P032210PS-0292
Originally uploaded by The White House
President Obama is congratulated by an ecstatic Hillary Clinton for finally achieving the goal of health reform. Hillary was the chief architect of President Clinton's own failed bid to reform health care back in 1993, so for her this victory must be especially sweet. Its literally been one of her policy goals for 20 years.