The president will be the president until 12 noon Tuesday, but most of his employees will be gone by the close of business Friday.

The moment did not pass unnoticed at Daily Kos, either:

It's 5:00 PM in the Eastern time zone, which includes Washington DC. 5:00 PM is the standard end of the workday. It's Friday, the end of the week. Monday is a federal holiday, so the mass of federal employees will not be working. On Tuesday President-elect Barack Obama will become President Barack Obama, our nation's 44th president.

Some White House staff will be kept on for the next few days. Certainly in the defense, foreign policy and domestic security areas there are Bush appointees who will--and should--remain on call or at their desks between now and Tuesday. The could still be some late-night activities happening with some of the legal staff. But in terms of devising, implementing and enforcing policies, as of this moment, the Bush administration is effectively over.

I watched the President's farewell address yesterday and found myself somewhat nonplussed by the rather muted final curtain call. The President (yes, still THE President - until Tuesday!) emphasized the creation of the Department of Homeland Security as one of his main achievements, which only underscores just how rarely a President ever has to travel by commercial airlines. I assume Citizen Bush will sing a different tune the first time he takes his shoes off at IAH.

It is important to credit the President where due - we may have disagreed on the means, but it is certainly true that no terrorist attack followed the events of September 11th 2001 on American soil. Of course, the rest of the world is another matter, and Osama bin laden remains free and alive in the hinterlands of Pakistan, so should another terror attack from Al Qaeda take place again (god and justice forbid), then the failure of the Bush Administration to take bin Laden to justice will be a partial responsibility. Hopefully President Obama's increased focus on Afghanistan will make it a moot point and bin Laden will finally face justice. But even then the threat won't end. Still, the fact that we did not suffer an attack again here at home is an important one.

Also, I think the President deserves much credit for his sensitivity to Islam. I know many muslims will read this statement and be aghast, but I've argued before that President Bush did everything he could to keep the rhetorical war aimed squarely at terrorists and not muslims. The fact that the Republican Party waged a war on muslims anyway provides excellent contrast to the President's actions, and muslims should recognize and applaud him for it. The story of the Eid stamp alone sis evidence enough.

The other major area in which President Bush deserves kudos I think is in Africa policy. As many have pointed out, the Bush Administration has provided billions in aid to fight AIDS, as well as other initiatives that have had a significant and non-negligible impact on the lives of millions of Africans. As the BBC notes,

By 2007, 1.3 million Africans were on medication, much of it paid for by the Bush administration.

Not that Pepfar is without its critics.

Some have attacked the US for preventing any funding for programmes that support abortion in any form.

Others suggested that it has downplayed the need to promote the use of condoms.

But no-one denies that the funding has made anti-retrovirals widely available, saving hundreds of thousands of lives.

The story on aid is much the same.

The US has backed programmes to cancel $34bn (£23bn) worth of debt for 27 African states.

I think that Africa is a quiet victory for the president - one that earned him no votes or popularity ratings, but which was indeed a mission of mercy and compassion. President Bush did not erase African suffering outright but he did help ease a portion of it, for a time, and that is a truly great thing.

In fact, I recall this political cartoon from the early days of the Bush Administration: 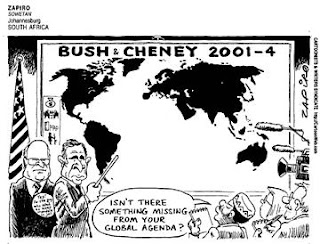 One might redraw that cartoon today with Barack Obama and Joe Biden instead, and ask just what they have in store for Africa. I hope they step up to the plate and exceed President Bush's example and commitment. Africa deserves no less.