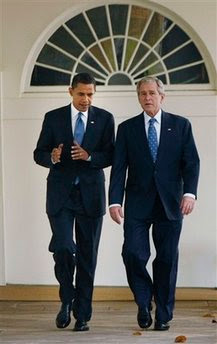 Obama certainly has hit the ground running, but as he pointed out himself, we only have one President at a time. That's why Obama did not attend the G20 summit last week, for example. Still, it seems that the media is trying to paint a picture of a co-presidency anyway. This story is long on the speculation but short on teh evidence:

America has never seen anything quite like this: The president and president-elect acting like co-presidents, consulting and cooperating on the day's biggest crises.

What Princeton University professor Julian Zelizer calls "the split-screen presidency" is the result of several historic forces converging this fall:

— The 24-7 nature of the global economy, which demands timely reaction.

— Incoming and outgoing presidents who have personal and political reasons to show that they can manage a crisis.

— A president-elect, Barack Obama , who "believes in strong government and wants to get things under way immediately," said William Leuchtenburg , a University of North Carolina at Chapel Hill professor who's written extensively about the presidency.

— A lame-duck president, George W. Bush , who's leaving office voluntarily. "Bush was not defeated. That makes for an easier relationship," Leutchtenburg said.

This transition lacks the formality — and the coolness — of the last two transfers of power that occurred during tough economic times, the 1980-81 change from Jimmy Carter to Ronald Reagan and the 1993 end of George H.W. Bush's term as Bill Clinton took office. Both new presidents then had defeated the former ones.

Monday gave a vivid illustration of the comity that's characterized the Bush-Obama minuet.

Bush had a cup of coffee in midmorning with Treasury Secretary Henry Paulson to discuss the government's decision Sunday to help ailing banking giant Citigroup . Later, on the steps of the Treasury building, next door to the White House , Bush assured the nation that Washington was ready to take similar action to help other financial institutions.

His statement took only two minutes, but it included this paean to his successor: "I talked to Obama about the decision we made. I told the American people, and I told the president-elect when I first met him, that anytime we were to make a big decision during this transition, he will be informed, as will his team."

About an hour and a half later, Obama unveiled his economic team at a Chicago news conference and mentioned that he'd spoken to Bush and Federal Reserve Chairman Ben Bernanke earlier Monday.

That's it? Obama is briefed on some economic issues and Bush mentioned Obama's name? The photo that goes with the story certainly makes it look like the two are deeply engrossed in Leading The Free World but it's actually from Obama's family visit to the White House, where the Bush twins showed bama's kids how to jump on the White House beds.

Of course Obama's transition team has to be in close contact with Bush, but the same would have been the case had McCain won. Given how much more accelerated everything is than even 8 years ago, a large amount of cooperation between outgoing Administration and incoming transition is mandatory.

There is definitely a romantic impulse at work here, which is fine. But co-presidents? I don't think so. When Obama starts attending Bush Cabinet meetings, or Hillary starts holding press conferences alongside Condi at State, then maybe we are enterig co-president territory.