Courtesy of Nate Silver's simulations, here's how McCain might win. The most plausible (but still improbable) scenario: Obama takes all the Gore and Kerry states, and McCain takes everything else. Everything else in this case includes states like Colorado (9 EV), where Obama's lead is the widest it's ever been and early voting favors Obama heavily. In other words: not gonna happen. Also, Virginia (13 EV) is looking very, very good for Obama, too.

However, continuing the scenario, if McCain can pick up Pennsylvania (21 EV), then he can compensate for VA and CO and win the election. This is probably Obama's worst-case, leaving him at 265, just shy of victory. However, despite McCain's late surge and heavy focus on PA, Obama still has a healthy lead. In fact, I think Obama will take PA, in part because of early voting, heavy turnout (weather in PA today is high 40s - low 50s statewide, no rain), and also racist placards like this, which are sure to hurt McCain more than Obama, due to backlash: 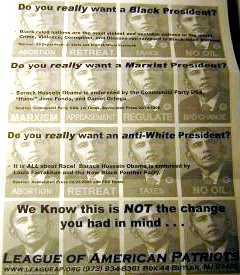 In
case it's hard to see, some of the text reads: "Black ruled nations are
among the most violent, unstable nations in the world."  and "Do you
really want an anti-White President?"

For McCain to win all of these would be an unbelievable coup - and he has no margin of error. If I had to guess, I'd say that FL will again go steady with the GOP despite flirting shamelessly with Dems for three cycles now. In Ohio, Obama maintains a healthy lead, but McCain has some recent momentum and Obama has been flat, so I'll give it to McCain. The same holds true in NC, where McCain has closed the gap rapidly in recent weeks, so I'm giving it to him. In MO, however, Obama is the one with the momentum, and McCain has lost ground, so I'm calling it for Obama. Likewise, I am calling Indiana for Obama - McCain has been flat there all year and Obama has sharply trended up since September.

A few more notes about Indiana - most of the population resides within the Chicago media market, so Obama is well-known to Indiana voters. Unlike Kerry who conceded the state without trying, and McCain who took the state for granted, Obama has 30 field offices and plenty of money on the airwaves there, and is headed there right now after casting his vote in Chicago this morning. So I am going to predict IN for Obama, which if correct is a major turnaround from 2004 where Kerry lost the state by a 20-point margin. Note that polls close in IN at 6 PM EST, so I think we will know as early as 8 how the state pans out, and it's likely to be a bellweather for the election as a whole.

In Georgia, Obama again has the upwards momentum, at McCain's expense. The momentum favors Obama going in but McCain still has a 3-point lead. However, with a large Arican-American population, and make up 40% of the early voters there. AA's make up 29% of the registered voters this year, 4 points higher than in 2004. And the weather today is great. I'm going to predict an Obama upset victory over McCain in GA, accordingly. The polls close at 7 PM EST in GA (and VA) so we should again know by 9PM what the situation looks like there. 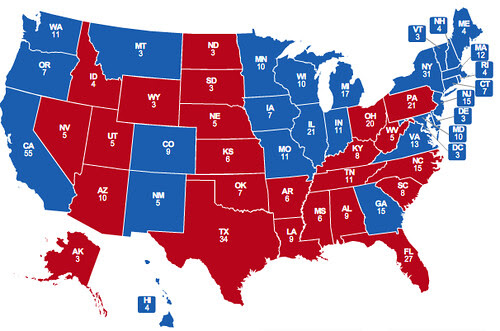 Of course, I am going out on a limb calling IN (11 EV), GA (15 EV) and MT (3 EV) for Obama. Those states add up to 29 EVs, so Obama could lose all of them and still win by 276 - 262. Likewise, I am being very pessimistic in calling PA (21 EV), OH (20) and FL (27) for McCain - losing any one of those would be catastrophic for McCain. So, my projection is actually about as favorable as you can get for McCain, albeit some speculative victories which Obama can afford to lose.

Cold electoral math aside, the playing field is stacked against McCain, partly due to Obama's superior campaign message and strategy, in part because of decisions by McCain himself, and in part due to factors beyond McCain's control.

One final thought: Obama's win today will be in large part due to Hillary Clinton. bama won his Senate seat against a lightweight, and had never been really tested in a bitter, tooth-and-nails fight for office. Hillary was the fire that forged him into the blade that will seal his victory today. Hilary is the one who tested Obama severely, on experience, on character, on associations, on Reverend Wright. Obama took those opportunities to respond, and thanks to the high-profile Democratic primary, the people heard him. By the time McCain faced off against Obama for the general, it was all old news, and Obama was ready for them. Obama is where he is today because Hillary fought hard and held nothing back.