in defense of the New Yorker cover http://blogs.abcnews.com/politicalpunch/2008/07/new-ironic-new.html

posted by Aziz P. at Monday, July 14, 2008 permalink View blog reactions
Many liberal bloggers are up in arms about the cover of the New Yorker, which succinctly replicates every right-wing frame, stereotype, and smear against Barack Obama that has been trotted out to date: 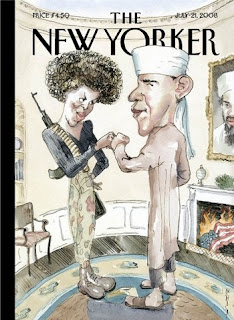 However, I have to disagree with the critiques - i think it’s brilliant satire. The rightwing pundits will try to argue that their critiques of Obama are “on the merits” but if you take their attacks literally (he's a crypto muslim, an extremist, a marxist, etc.) then the cartoon on the cover is in fact the logical portrait that results. Its a mirror reflecting all the ugliness about Obama in the right wing media at once.

I think that the right cant be given a pass on the implications of their rhetoric. This is what they are describing on talk radio and The Washington Times and Fox News. Lets hang this around their neck.

I think if we are too unforgiving of the risk that the New Yorker took in runnin this cover, we are part of the problem of diluting political discourse into “safe” channels and thereby leaching all serious analysis out of it. This cover is tame by 19th century and early 20th century political cartoon standards. We need to be - yes, I am aware that teh word is a bit ironic - post-racial, exactly as Obama argued in his famed post-Wright speech on race. Taking offense at the caricature shuts down critique of the very speech that leads to it in the minds of those for whom this is not satire.

Satire, and Irony, are the two most dangerous tools in the free speech toolbox. When wielded properly, they are devastating. But it takes practice to do so, so we should be more tolerant of good-faith attempts to do so.

I am of course going against the grain here. Two bloggers i respect highly, Kevin Drum and Daniel Larison, both took issue with the cover for more sophisticated reasons than merely "it's racist!" - both see the attempt at satire and attempt to explain why it fails rather than react in knee-jerk fashion to the content without considering intent.

Larison argues that the cartoon was intended for a specific audience, and once it escapes that high-information pool, the ironic edge will be lost:


In an era of instant, mass communication, the image will be, indeed already has been, circulated widely and will gradually lose whatever “ironic” edge it once had. That the image derived from a New Yorker cover and was intended for an audience of high-information, predominantly left-leaning voters who already support Obama will be irrelevant or will add to the “credibility” of what the image conveys. Then the word will go forth in forwarded emails everywhere: “Even The New Yorker thinks Obama is a secret Muslim, etc…"

Ironically, this is a high-information argument. For one thing, it is precisely the left-leaning supporters of Obama who are the most outraged by the photo, and those are the ones who are most informed about the attacks on Obama by the right-wing. As far as the ordinary average voter goes, if they are low-information then I doubt they will ever even see the cover at all. Suppose a low-information undecided voter does see the image, however. Will they really be inclined to suddenly believe in the muslim smear, merely because of a cartoon from a magazine that they (who are postulated to be low-information, remember) have probably barely heard of anyway? It's a circular argument of sorts and in all likelihood the cover will have no role apart from validating what people already are inclined to believe.


If artist Barry Blitt had some real cojones, he would have drawn the same cover but shown it as a gigantic word bubble coming out of John McCain's mouth — implying, you see, that this is how McCain wants the world to view Obama. But he didn't.

Good satire should indeed be ballsy, but it also needs to be deft. Would a giant thought bubble emanating from McCain's head containing the image above really be an improvement? Or would it look heavy-handed and clumsy? Especially since Kevin knows full well (as do we all) that it is highly unlikely that McCain believes any of this about Obama, but instead cynically exploits those stereotypes to attack Obama. Of course McCain doesn't get his own hands dirty either. Why tie this around McCain's neck when it really is an indictment of the entire right-wing?

At any rate, my specific disagreements aside, I think my argument above about the perils of censoring ourselves also holds in reply to Daniel and Kevin. I want more of this kind of thing, not less, in our political discourse.

If anything, the brouhaha over the cover cartoon threatens to eclipse the solid journalism of the cover story by Ryan Lizza, which is a tough but fair look at Obama's rise to power and one that should be read by every supporter so that future gnashing of teeth over supposed betrayals of the progressive wing can be minimized.

UPDATE: Andrew Sullivan also found the cover to be good satire, and argues "the notion that most Americans are incapable of seeing that strikes me as excessively paranoid and a little condescending." Agreed.

UPDATE: from an earlier dkos diary by dcdanny:


Look again at the New Yorker cover. An American flag burns in the fireplace of the Oval Office. A portrait of Osama Bin Laden has replaced George Washington. The first lady wears combat boots. That, my friends, is how Rush Limbaugh and Brit Hume want you to imagine the White House if one of the most promising candidates in our nation’s history wins the office. Funny, in an awful, thought-provoking kind of way.

This New Yorker cover, if it is indeed discussed on the cable shows and over the water cooler, will not stoke the prejudices of swing voters, nor rally more racists to go to the polls. It’s much more likely to help bring the toxic discourse out in the open, where it loses its force. Like the controlled virus in a vaccine, the cover may just inoculate some voters from the poisons in our politics.