IN and NC: head fakes and decision trees

posted by Aziz P. at Friday, April 25, 2008 permalink View blog reactions
This Dem primary has been invaluable in the sense that it has been a goldmine for the demographics of the liberal, Democratic-leaning electorate. In a post I did a while back, I compared the primary outcomes for Ohio to Wisconsin and found that the two looked remarkably different:

Wisconsin is not a rust belt state like OH and PA and hence economic concerns (especially NAFTA-gate, which turned out to have been wholly false) play a greater role in the voters’ consideration. Wisconsin has a much more diverse economic foundation and thus I think Wisconsin was more receptive to idealistic arguments than mere pocketbook and standard of living ones. The electoral maps of Ohio and Wisocnsin are almost inverted: 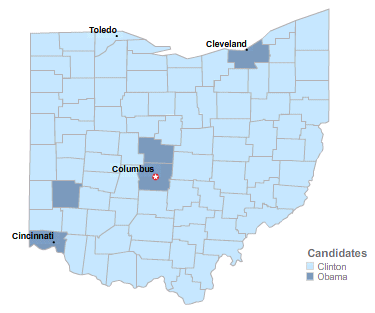 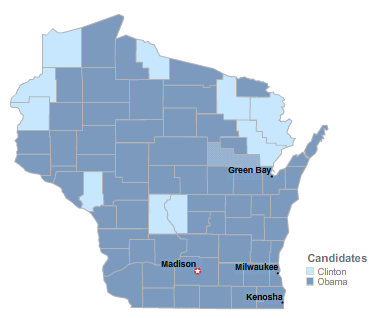 Obama consistently does well in urban areas but the rural regions of both states were played quite differently.

Like many others, I predicted that the PA map would resemble Ohio more than Wisconsin, and that turned out to indeed be the case: 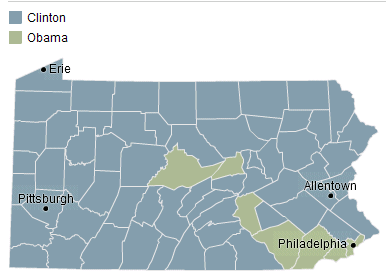 It's interesting to note that Indiana however is a "border" state of sorts. It is not a pure rust belt state, nor a pure midwestern one, but a combination of the two. The entire upper northwest part of the state is dominated by proximity to Chicago and its media markets. Indianapolis dominates the center, and the rest of the state is a mix between agriculture and industry. It is no wonder that it's a close race thus far, with the latest polls showing a statistical dead heat.

The outcome in Indiana is likely to be influenced as much by externals as demographics, therefore. Obama had plenty of time to recover from any damage he may have incurred from the Wright affair, and the "bitter" comment didn't seem to blunt his momentum much (he still made inroads on all core demographics relative to his performance in Ohio). But a mis-step prior to Indiana could well have a larger impact, since the race is closer, and the time window is smaller. Hillary is better off, as she is unlikely to have any more gotcha moments (her Bosnia sniper comments didn't seem to hurt her much either and she had nothing on the scale of Wright), and she also still plays the expectations game better than Obama. Regardless of outcome in Indiana (aside from a blowout 20 point Obama win, which won't happen), Hillary comes out of Indiana with at worst no damage and at best significant momentum for the real prize ahead - north carolina. As Joe Trippi put it on Twitter, IN is a "head fake": 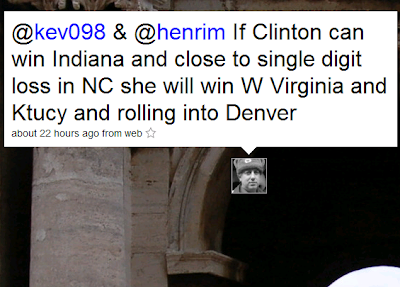 That's Joe on Twitter (follow him at @JoeTrippi). The real prize for Clinton is not Indiana, but North Carolina. In another tweet, Trippi speculates on Clinton's strategy:

I think that Clinton can still claim victory in Indiana with a narrow loss, so the above strategy will still apply. So really her focus is on NC as her make or break. The flip side is that a loss in NC will probably be the this-time for-real end of her campaign (assuming the superdelegates haven't made their move en masse as Pelosi, Reid, and Dean would prefer).

Thus, predicting NC is far more interesting than Indiana. To that end, the NYT today as a fascinating "decision tree" based on data from the entire primary season thus far: 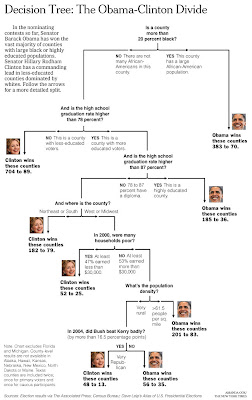 Here in a nutshell is the best predictor for NC, and by extension, the entire race. All that is needed is for someone (more enterprising than myself) to apply that formula to each of NC's 100 counties. The answer should give us not only a predictor but even a probability (the tree helpfully gives percentages which we can treat as p-values for a robust statistical analysis).

I've long thought that there's a paucity of serious statistical analysis in politics. Anyone can calculate a MoE, but wouldn't it be awesome to take the data, the tree, and crank out some 95% confidence curves for a change?

The data is there. And so is the algorithm. Anyone want to step up to the plate?