posted by Aziz P. at Friday, June 09, 2006 permalink View blog reactions
This blog originally launched in August of 2002 when I discovered a then-unknown candidate, Howard Dean, running for President in 2004. Just a year later, this blog was already at the center of the campaign, with Joe Trippi reading daily. We had some amazing successes, including raising over $40,000 for the campaign as a community, bringing Meetups to prominence, and building a genuine community that was no mere echo-chamber of boosterism.

That community has long since dispersed, it's rationale for existing over. Sites like Dailykos.com and myDD.com are far more important in promoting the agenda of Democratic politics. It is worth noting that I am not a Democrat, however. Therefore, after the campaign, my interest in purely partisan objectives waned. 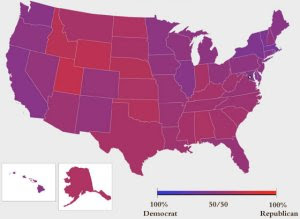 I have been arguing for something called "purple politics" for some time now. In a nutshell, I think that the dichotomy of our political system is artificial, sustained by the self-interest of the pundit class and the apathy of the establishment media. I believe that there is a True American Majority that is neither red nor blue, but purple - reflected in the 2004 election results when you strip away the binary us vs them perspective and allow for shades of gray (er, purple). I believe that what is needed is more unifying rhetoric, less dividing - and I took Howard Dean to task on tha score as well. And I believe that the future of American political discourse hinges on that silent purple majority.

As I mention in that previous post on discourse, I kept the name Dean Nation while I was developing my Purple Politics theme in the electoral aftermath. The name referred to an ideal, the same ideal which drew me to Dean in the first place. Dean truly was a purple candidate - but he attracted and was ultimately defined (however unfairly) by his hordes of deep-blue (verging on black) supporters. I think though that it's time for a new beginning, a generalization of that ideal beyond merely one candidate.

So, I present to you our new identity: Nation-Building.

The name refers both to the classical liberal goal of promoting genuine freedom and liberty abroad, and to the liberal progressive goal of empowering human potential and justice. I will solicit views from across the spectrum of classical liberal thought - including some who might ordinarily be labeled "conservative". The ultimate goal however is to apply principles to policy, and to foster genuine debate, so that the voice of the True American Majority - the silent purple masses - are finally represented.

We aren't interested in divisive generalizations and labels - no mention of neoconservatives or leftists or moonbats or wingnuts allowed. We want to discuss ideas, principles, and policies. It is my hope that this site will be the nucleus of a new community, one that rejects the dichotomy forced upon us by pundits and media and partisans alike.

Welcome to Nation-Building. Let's get started.

I would suggest that you start this with a new URL and new blog.

A lot of us who are centrist in a lot of our views really did not like the Dean campaign or what it did during the 2004 election. Indeed, yours truly was a very big Anti-Howard-Dean campaigner, doing all I could to encourage Democrats not to give him the nomination,. (I alas backed Joe Lieberman in the primaries, an even more doomed effort, and also tried to support Wes Clark.)

Up to you of course but it's what I felt, and you're looking for feedback, so...

aziz, i think a better start would be to frankly admit that Dean devolved into a crazy person, who became increasingly bankrupt of any ideology except that of vote-whoring.
sorry.

um... no. I'm not going to accept your opinion as fact :) Especially since (no offense intended) I know a lot more about Howard Dean than you do - almost everything you know about Howard Dean you heard from the establishment media is totally wrong. Not unlike George W Bush.

But more importantly because the concept of purple politics transcends the 2004 election.

This blog is looking forward, not back.

you do know more than i about howard.
perhaps his revelations vis a vis abortion and confederate flags were actually attempts at your purple politics, but so incredibly unskillful that he appeared to be bartering dem ideology for votes.
or perhaps it is just like the Economist said after the caucuses-- Howard Dean is remarkably non-telegenic.
the Economist actually said "...revealed as an ego-manical dwarf.."
Kos talked about the "success" of the netroots campaign for Dean on Meet the Press today.
Kos is also non-telegenic, for me at least.
those guys shoulda stuck to the interwebs. ;)

I give you much respect for trying to find common ground at this particular time.

Unfortunately, I think your task is harder than you imagine. As I make it out, the purple map does not reflect a nation with a common core, but a nation that is more or less equally divided. My experience is that there are significant and deep differences -- essential differences of culture and principle -- between the "red" and "blue" state points of view. They will not be easily resolved.

Regarding Dean: like you I was an early and enthusiastic supporter of Dean. To this day, I can think of no substantive issue on which I disagree with him.

In any other modern democratic nation, Dean would solidly occupy the middle ground, if not be slightly to the conservative side. At almost any point in US history over the last, say, 80 years, ditto.

It's only here, and now, that he can in any way be described as a hard core lefty, or an extremist. That is 100% due to his position on Iraq. It's also indicative of something bizarre about current American political opinion.

The worst thing I think anyone can, objectively, say about Dean is that he doesn't have the temperament to be the national public face of a political party. I think he's found an excellent position for himself, and is doing a great job with it.

Thanks for the update on what you've been doing here, I'll be back.