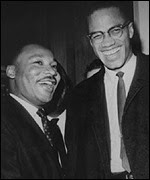 in 1964 these two men met. Some would say they represented polar opposites: Christian and Muslim, pacifist and warrior, mediator and antagonist.

I see two men, of faith but also of resolve, who saw an injustice and articulated its downfall, who serve as an inspiration to me as the son of immigrants that this great nation is a land of promise. But fulfillment of that promise often requires struggle.

Struggle - jihad - crusade - a righteous endeavour for justice. Pope John Paul II was also one of a kind with these men, against a different type of oppression, but oppression all the same.