posted by Aziz P. at Sunday, January 30, 2005 permalink View blog reactions
This is why George W. Bush - and Howard Dean - were right to believe that the elections should not have been delayed: 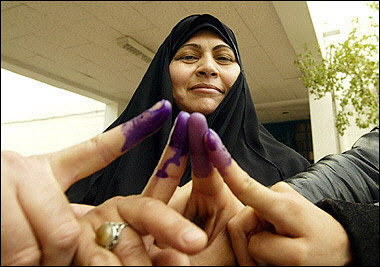 Iraqi women show off their ink stained fingers after voting at a polling station in the Salhiyah district of Baghdad.(AFP/Ali al-Saadi)

BTW I'd like to encourage all of you with a dKos account to go and recommend this diary by Zackpunk. Let's show the naysayers that freedom is a Purple virtue.

While no one can deny the power of being able to vote in Iraq, I cannot shake the oddity of how easy it will be for insurgents to pick out those that did vote by their ink stained fingers.

At the same time I admit that I am amazed how open Iraqis have seemingly been in being branded in such a way, as a mark of pride.

Hopefully we will not hear stories of retaliation against voters.

there already has been some reports of violence against voters, but without the security presence it surely woudl have been worse. I think that the social celebration of the vote in Iraq is itself a powerful repudiation of the insurgency.

Aziz, thanks for your efforts in convincing liberals to recognize this vote as a positive development. There is a hope for compromise in this country only if we have some fundamental values in common. I believe a commitment to freedom and democracy should be one of those values and your response to this election keeps my hope alive.

This comment has been removed by a blog administrator.